Solving a second-order ODE with NumPy and SciPy

I was going through my ODE notes the other day and wondered if I could solve any of them with Python. I gave it a shot for one of the simpler equations, and here are my results (with analytic solution included for comparison).

Say we have the equation

In real life, this sort of problem often comes up when you’re dealing with a circuit containing a capacitor that discharges through an inductor over time, and you want to analyze the voltage or current going through any given part of the circuit while this happens. Generally speaking, this is only one small part of a real-life circuit problem: you know that when you flip some switch, the circuit can be simplified to the above equation and that lets you solve it for some range \(t_1 < t < t_2\), where \(t_1\) and \(t_2\) are the time boundaries where you didn’t have the switch thrown.

Our analytic solution will let us write an equation for \(y\) that’s solvable for any time \(t\), but the numeric solution in Python will just give us answers in some range that we actually calculate. Depending on what we’re trying to do with the answer, the numeric solution might be all that we need.

If you’ve taken a class on ordinary differential equations, then you should recognize this as a second-order linear homogeneous ODE with constant coefficients. If you haven’t, no big deal then either. Regardless, I’ll go over the exact analytical answer, since it’s pretty easy to find in this case.

Purely from an analytic standpoint we can tell that this is harmonic oscillator with a strong cosine term and a weak sine term that starts at 1 and eventually dampens, tending toward 0. That makes sense: it’s what you’d expect to see if you have a capacitor discharging and there’s nothing to supply energy back into the circuit over time.

It turns out we can get a numerical solution to this kind of problem using Python’s excellent NumPy module and the SciPy toolkit without doing very much work at all. The scipy.integrate.odeint function is of particular interest here. One problem: it only works for first-order ODEs of the form \[\frac{\mathrm d y}{\mathrm d t} = f(y,t_0,\ldots), \] so we need to do some twisting to get our original problem in that form.

Which is equivalent to our system of equations above, excluding the initial values.

Then to get the solution:

If we stack our data up into a 3-column array in the main() function and write this to a CSV:

Then we can plot this in R.2 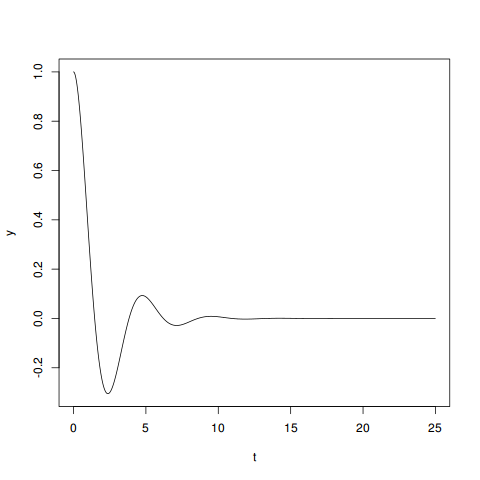 I’ll add that the Python solution here is not just a mere plot of the analytic method. We could have done this for an equation even if we don’t remember how to solve it ourselves, as long as we’re able to reduce it to a first-order ODE system like here. SciPy has more advanced numeric solvers available, including the more generic scipy.integrate.ode for dealing with more complicated equations.

But overall, considering I had never used Python to solve this sort of thing before, I’m pretty impressed by how easy it was to work through this solution. I’m looking forward to pushing Python’s numeric/mathematical capabilities further in the future.